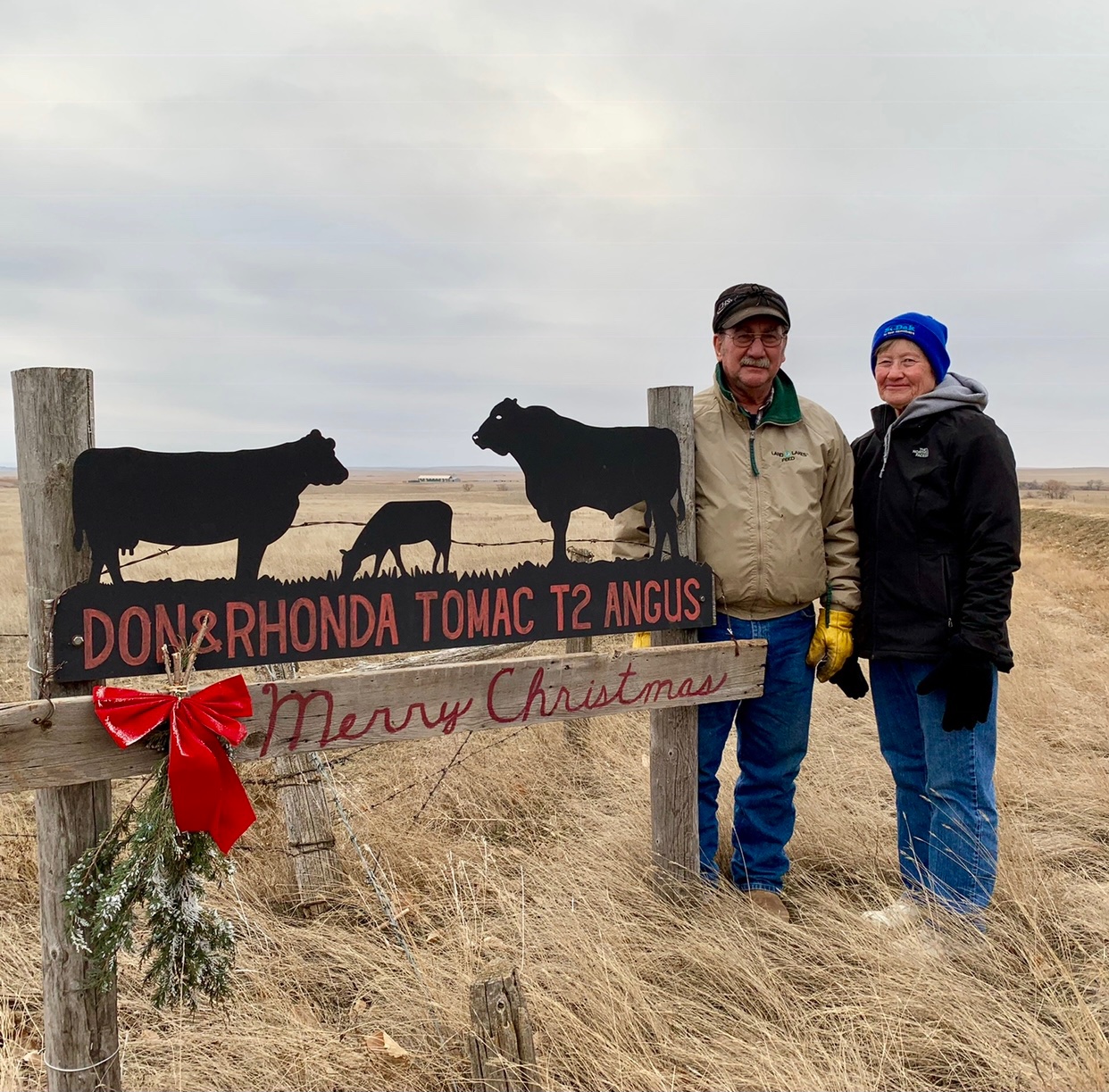 Don’s grandparents emigrated from Austria in 1906 and settled in the Keldron area, where they met and married. As time marched on, his father Emil purchased a ranch 13.5 miles southeast of Keldron in 1951. It was there that Don grew up, and also where he returned in 1975 after college and his commitment to the service.

Don and Rhonda were married in 1978 and have worked together as a team since. They’ve raised four daughters, who now live in Maryland, Lemmon, SD, Sturgis, SD, and Hettinger, ND, and have four grandchildren.

At T2 Angus, the Tomacs manage a cow-calf operation supplemented by some farming for haying and feeding. They enjoyed ranching with Don’s father, Emil, until 1994, and expanded the herd as they leased a place near Lemmon, SD.

Angus genetics are a defining part of their operation, tying back to Don’s grandfather. As a third-generation Angus rancher, Don finds the tried-and-true qualities of the breed as trustworthy as it gets.

“They’re the most efficient cows you can raise,” he said. “They are easy calving, and produce a bigger calf than a lot of breeds even with typically bigger cows.” He appreciates the gentle nature, especially with their heifers. When it comes to picking bulls, Don has practiced the art of narrowing down the best additions to his herd. Eye appeal, and EPDs like WW, YW, Milk, and Docility guide his decision making.

When it comes to family, Don and Rhonda have found that ranching is a good place to grow kids, too. Their girls were a big part of the ranch, learning responsibility and how to work together. They’re grateful for the chance to have their daughter from Sturgis help out during summers and sometimes calving, too.

Don is grateful for Rhonda by his side, helping every year. “She knows the cows better than I do,” he said, smiling. Whether it’s a certain cow’s maternal history, or specifics about the herd, she helps keep things running smoothly.

In looking back over the past 45 years of ranching, the Tomacs shared the themes of passion, purpose, and perseverance.

Ranching takes passion- if you didn’t like it, it would be hard to stick to it. Don recalls some March blizzards just a week or two after his return to the family ranch. He knew it would have challenges, but it was worth it.

Finding purpose in one’s work has been a guidepost over the years, too. “Get at it and do it. There’s always the reward of seeing what you’ve accomplished through hard work,” they said.

And then there’s perseverance, which has been an important value that has driven their ranch management goals. Rather than specific turning points in the operation’s growth, Don remarked that continual determination to succeed and plain hard work made daily changes.

If he were to share some encouragement for ranchers in their early years, he says to give it your 100% and keep up the determination. “You can’t expect someone else to do it. If you want something bad enough, keep at it until you get.”

“We consider it a great privilege to care for the land and cattle God has blessed us with. He is with us always, enabling us to do all we need to do each and every day,” the Tomacs shared.