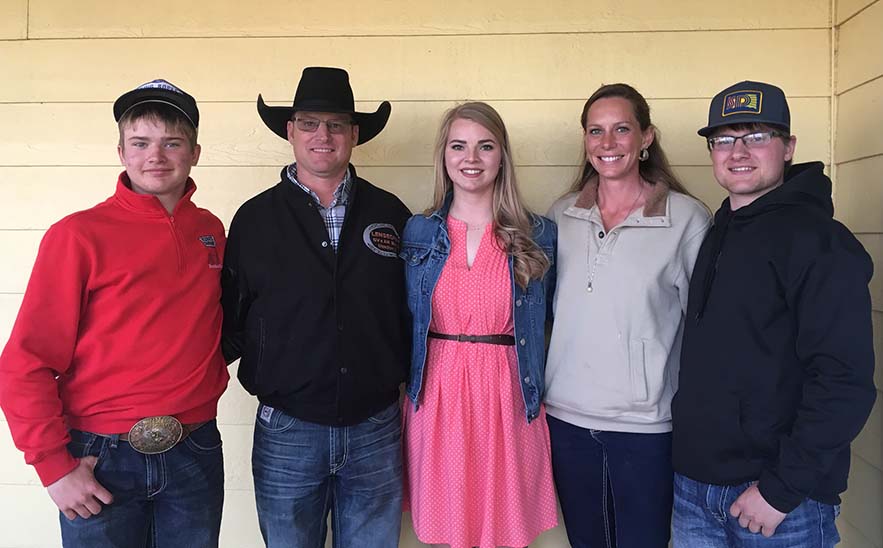 The Arneson Ranch is located 25 miles north of Faith, SD. Having transplanted from Big Timber, Montana to South Dakota in 2004, Eric has continued what he knows and loves as a fourth-generation rancher.

Their cow-calf backgrounding operation focuses on their predominantly Angus commercial cow herd. After weaning, the calves are back-grounded in the Arnesons’ feedlot located near Chance, SD to 800 pounds and then marketed after January 1. All of their replacements are maintained, backgrounded and prepared for breeding.

Eric and Mindy’s family has enjoyed working together on the ranch, transitioning from the younger years of learning to the young adult years of being actively involved in the operation. Their daughter Sydney is currently a teacher in Montana; their oldest son, Reed, graduated from SDSU last spring and has returned to ranch; their younger son, Ian, is a junior at Faith High School and plans to return to the ranch.

“The neatest thing that I’ve found in working with family, especially with my oldest son home, is the diversifying of responsibility. We all know where our strong points are and feed to that,” Eric shared. Mindy, who has experience in a vet clinic, focuses on the animal health part of the picture. Likewise, their son’s ag education is bringing a lot of value, especially with the feedlot, which he manages. “We are all working toward same goals and is seamless in that way,” Eric remarked.

When it comes to choosing Black Angus, Eric has come to appreciate the marketability of the breed. As he sells feeder calves into the Certified Angus Beef program, they basically sell themselves, he finds. “The Angus breed is so large that you don’t have to go far to find bulls, with so much diversity within the breed,” Eric said.

When it comes to buying bulls for his operation, Eric narrows it down to three main factors. First, he looks at docility, and second at the maternal side, specifically for a good momma cow and great maternal bull. Third, he looks at performance, focusing on the weaning weight ratios, calving ease, and birthweight EPDs. He noted that the dollar value EPDs add another layer to decision making that accents the weaning ratios.

When asked about how he’d advise a new rancher to set goals, Eric says, “Look at your operation and see what you have and God has given you. Some ranchers sell the calf off the cow, some background, and some go all the way to the rail. It’s similar, but vastly different, which makes it important to find out what you have and how to market that.”

With the current economic climate being a bit unpredictable, the Arnesons’ goals aren’t changing much. They’re keeping on course to produce quality calves and enable the cows to make a marketable product in the end.

Taking it to the big picture of life and ranching, Eric’s main priority is serving his family. Beyond the specifics of operation management, he is working to be in the best place to hand it off to the next generation.

Eric and Mindy consider themselves very blessed to live where they do and be able to do business and ranch with the neighbors around them. “I’m kind of a new guy, but there are a lot of multigenerational people about us, and I love how the whole community has taken us in.”